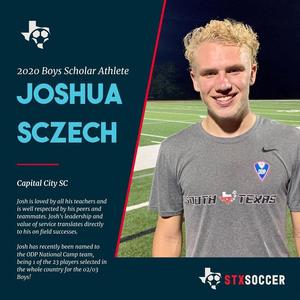 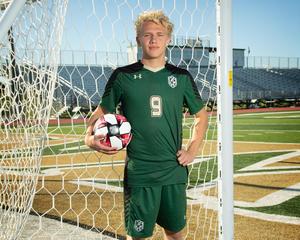 A student leader both on the soccer field and in the classroom, senior Josh Sczech is being honored for his hard work, dedication and perseverance.

South Texas Youth Soccer named a Canyon Lake High School senior as its Boys Scholar Athlete of the Year for 2020.

Joshua “Josh” Sczech, 17, who currently has a 3.68 GPA, received a $1,000 scholarship and plaque as this year’s scholar-athlete award winner.

“I am honored to have been selected for this award,” said Sczech who hopes to play soccer professionally one day and coach the sport he loves. “It means a lot to me to have been recommended by my coaches and school administrators. I couldn’t have gotten to the point of receiving this award without their support and dedication to my development.”

This is just one more honor for Sczech who has been playing soccer since age 5 and was invited to the national camp for the US Youth Soccer Olympic Development Program last year. A member of the CLHS Hawks soccer team, he was named district and area MVP as a sophomore as well as being selected to the all-state team.

A volunteer coach at Bulverde Youth Soccer Association, a licensed youth referee with the United States Soccer Federation, a member of the Superintendent’s Student Advisory and more, Sczech is praised by coaches and teachers for his work ethic, respectfulness and kindness.

“Josh is an exceptional student and truly embodies the definition of student athlete,” said CLHS Principal Kristy Castilleja. “He is a student leader on campus and contributes to several organizations such as ‘because I said I would’ and the Superintendent’s Student Advisory. He leads by example and works hard to accomplish the goals he sets out for himself which include in the classroom and on the field.”

-Josh Sczech is a senior at Canyon Lake High School and was named the Boys Scholar Athlete of the Year for 2020 by South Texas Youth Soccer.